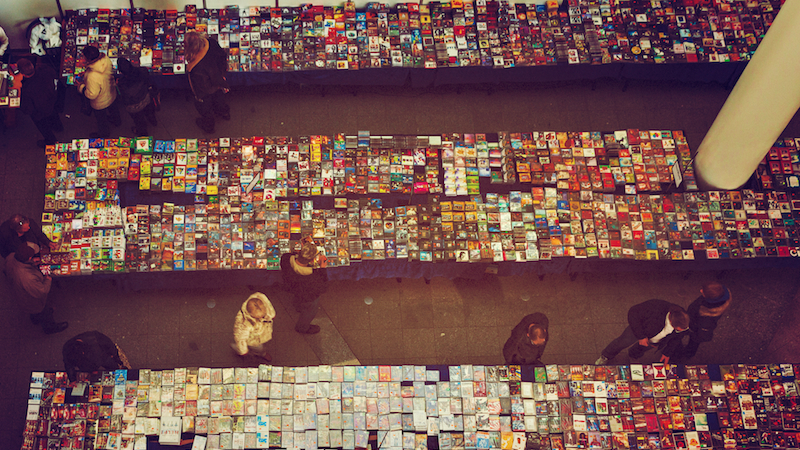 Have you ever found yourself stood in front of a store shelf, jam-packed full of headphones, trying to decide which ones to buy?

A friend of mine and I were in that exact situation not long ago. “There are the in-ear ones”, I told him, pointing with my finger to the left side of the shelf and nudging him with my elbow. The shopping center was crowded but our aisle was a bit quieter. “This Panasonic pair don’t look bad”, he said, gesturing towards a colorful $19.95 model. “Or look at these ones, they are noise-isolated”, he went on, before finding another pair two rows below, with a big typography saying DEEP BASS.

Once upon a time, many different companies came up with the idea of selling headphones; now, they were all gathered for battle in that little arena in front of that shelf, all competing for something my friend had in his pocket: money. However, these companies know that money is just paper, just an inanimate object; what they want to persuade is its owner’s brain. What he feels, what he thinks, what he needs. Because of the irrepressible nature of humanity, we have been refining this technique, making it better; it’s called the art of marketing. And we understood what this was about: just a complex commentary about how we, the people, are.

Companies want to persuade the buyers’ brain. What they feel, what they think, what they need.

However, believe me: this is changing.

“Dude, let’s leave, I won’t buy them today. I’ll think about it a bit more”, my friend told me, overwhelmed by too many offers. It wasn’t our day: too many people, repetitive loud music, annoying lights… in short, it was better to postpone it for later.

We left the shopping center and forgot our sorrows by eating a hotdog, while taking a walk to enjoy the surroundings. “I’ll buy them online”, he said between bites. “Even better, I’ll wait until someone invents a shopping robot”, he went on, smiling. We both knew that was a quote more suitable to the script of The Big Bang Theory than real life.

The truth is that from that moment, we started a little debate. What would have happened if instead of a human, it was a robot who was the one staring in front of the shelf? How could brands transmit their message to a robot? How could they manipulate a machine to get a sale? How could the robot understand all that chaotic and relatively non-structured data? What would the robot take into account to decide which headphones were better for his human owner?

It may sound crazy, but in the online world, something very similar is already happening. The best example I can think of is SEO, the technique which allows people to rank higher on search engines. Everybody knows that if you get ranked in the first page of Google, that means hundreds of visitors for your website… which can be translated into what my good friend had in his pocket.

Just like the headphone brands attracted buyers’ attention through slogans, smart packaging or pricing strategies, a CEO behind an online business is going to work to have a perfect website, one which is fast and with good content that is shared widely. That CEO is going to worry also about who links to their website, which are the more relevant keywords for his or her business and if the content of the website fits within those premises.

Those headphone brands were reaching humans. However, in addition to reaching humans, online businesses also have to reach machines; machines designed by humans and supervised by humans—but machines nonetheless. Machines which have to decide what is the topic of that website, how good for other people is that content, and, therefore, which rank that website deserves in comparison to the competition. Those machines have the power to decide whether businesses may or may not earn thousands of dollars—and that’s happening day after day.

Online businesses, in addition to reaching humans, also have to reach machines.

With this situation in mind, we couldn’t really blame those businesses which focus massively on being liked by the robot responsible for letting them earn a lot of money. They can even forget that behind all their complex SEO strategies, there are still humans visiting their website, humans who will have to convert in some way… so they forget that humans couldn’t care less about keyword density or link building. Some businesses are guilty of forgetting the human and focusing their attention solely on the machine.

“I can see that, definitely, those robots are not to be trusted”, said my friend. His hotdog was almost finished and he started to participate again in our conversation. “Don’t go too far buddy”, I warned. “In fact, it’s not about them, but about us”.

I do not fear computers. I fear the lack of them.

Every day, the world is becoming more and more overloaded with information that needs to be filtered and ranked in some way in order to be consumed. That’s where the algorithms become important in our society, and that’s one of the reasons why we have transformed just a humble search engine into one of the most powerful online businesses in the world. Nobody forced us, we created it ourselves… because we really needed it.

A search engine is not just a tool to consume, it’s a tool which consumes in its own right. A robot which consumes what humans produce will store it, filter it, rank it, put a bit of sauce on it, then give it back to us in a way which satisfies our expectations.

A search engine is not just a tool to consume, it’s a tool which consumes in its own right.

The future speculations tell us that those robots are going to become more and more similar to humans, so reaching a robot or a human will be more or less the same. However, at the present time, we are still very far from that. Nowadays, there is no sense in thinking that a robot could do a complex task in the same way as a human would do it, be it choosing a pair of headphones or ranking a website. Robots have both the advantage and the disadvantage of having no emotions, but we are and will be emotionally-dependent and emotion-followers.

PS: For the record, such a dense discussion required one more hotdog, to aid with our digestion of its weighty themes.